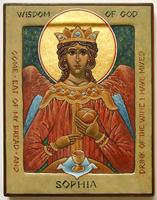 When Jesus was seen as an incarnation of Sophia, a mismatch of gender was noticed. Sophia is feminine, but Jesus was of course masculine. How can a woman incarnate to become a man? This difficulty was slowly resolved by changing the gender of Sophia. All the attributes of Sophia were transferred over to the Son of God (Logos) as we find in John’s Gospel and in the later epistles attributed to Paul.
For Further Reading:
A Biblical Sophia Christology