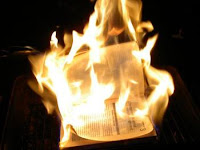 The other day I happened to overhear this conversation between two people:
Are you a Christian?
No, I am a Catholic.
Once the word “Christian” included all kinds of Christians, but today this word, at least in America, is used with a very limited meaning. It seems to denote a group of Christians who describe themselves Bible-believing and evangelical. That is why this person responded that he was not a Christian but a catholic.
This is not a unique case of a word which is used to mean simultaneously the whole and also a part of it. Many commonly used words in our language are often used with double meaning: to denote the whole, and a part of it. Consider the word man. It may mean human or male human depending on the context. Earth may mean the planet earth or soil. Head may mean the part of the body above the neck or the back part of head covered by hair. New York may mean New York state or its capital, New York city.
If someone asks me if I am a Christian, I cannot give an easy, one-word answer any more. If I do, he/she might mistake me to be an evangelical Christian. I don’t have any objection to call myself a Christian in its wider sense because I was born and brought up within the Christian religious tradition, and my worldview has been very much influenced by my Christian upbringing. So if someone asks me if I am a Christian, I will most probably respond with a counter question: what do you mean by Christian? Once I understand the sense of that word for him/her, then I can answer the question affirmatively or negatively.
Some Christians in our world express their faith by burning the holy books of other religions. I have nothing to do with that kind of Christianity. I hear in the news that some Christians are planning to burn Koran publicly on September 11th of this year. This decision to burn Koran sharply divides the Christian world into two or maybe three: the Koran-burning Christians, the Koran-honoring Christians, and the Christians who don’t care. In this situation, if someone asks me if I am a Christian, I want to make it clear that I am not a Koran-burning Christian. I also want to make it clear that I am not among those Christians who don’t care. I am among those few Christians who honor Koran.
Let me explain briefly what I mean by a Koran-burning Christian. Such a Christian sees the followers of other religions as his/her enemies. Salvation for them means conversion from other religions to Christian religion. The growth of Islam and Hinduism and Paganism makes them feel panic. They earnestly believe that one of these days Christ will appear in the sky, and take with him to heaven all those people who believe that Christ died for their sins. They believe that some people in the world are God’s children, and some others are Satan’s children. For them, all non-Christian religions are Satanic, and all those people who belong to those religions belong to hell. They cannot be seen as brothers and sisters until and unless they get converted to Christianity.
In my younger days, when I was ignorant, I was also a Koran-burning Christian, but not anymore. I am among those Christians who honor Koran. I also honor all other religious scriptures from the past along with the Holy Bible. They all belong to the precious inheritance of humankind. If I expect my Muslim neighbor to honor Holy Bible, I should also honor Koran. If I do not, how in the world can I expect him/her to honor the Bible?
I believe that all people in the world are God’s children regardless of their religious affiliation. God has no religion, and God doesn’t care for anybody’s religion. If God loves all people alike, I should also see all people in the same way. My Christian faith makes me see all people in the world as my brothers and sisters, and also makes me honor their religions and their Holy books. Conversion for me is not from one religion to another religion; it is from darkness to light, from self-righteousness to God’s righteousness, from hypocrisy to honesty, and from death to life. One doesn’t need to change religion for such a conversion. The Koran-burning Christians are badly in need of such a conversion from darkness to light.
Just as there are Koran-burning Christians, there are Bible-burning Muslims as well. But there are a lot of Muslims who honor the Bible, but a lot more might be among those who do not care.
I think these three groups will always be there in any religion at any given time. If so, why is it a problem now? For the simple reason that the Koran-burning Christians and the Bible-burning Muslims have become very powerful groups today. These short-sighted and ignorant groups have immense economic and political power at their disposal. The world is at their mercy. The solution? The Koran-honoring Christian group has to become stronger, and expose the dishonesty and self-righteousness of the Koran-burning Christians.
Posted by John Kunnathu

I agree with your comments in large measure. But, I have great difficulty in honoring "in toto" any religious "book" of any faith, since there are parts in every faith's book that are antithetical to human dignity, decency and rights.

Speaking of my own faith of Christianity, there is a great deal in the Old Testament that I abhor and parts of even the New Testament which I consider primitive, where women are considered subordinate to men, approval of slavery, unsuitability of women to hold priestly positions etc. Having said that, I must indeed concede that there are many parts in every sacred text of every faith which are universally deserving of honor, respect and reverence. Koran is no exception to this.

In spite of such deficiencies in the sacred texts of religions, it is an uncivilized act to desecrate or destroy any faith's holy book or its relics or iconic objects. The Koran-burning Christians do not in my opinion deserve to be called civilized human beings. Certainly, they cannot be called Christians of any kind.

A timely and appropriate piece of thought ---
The extremists' voices grow louder when moderates remain silent. There are extremists in all religions including christians, our history tells us that.

Is'nt it intellectually challenging to reflect on why such heinous and rigid stances emanate most often from the fanatic followers of Islam and Christianity and rarely if ever from those who practice a more panentheistic or polytheistic or non-theistic concept of God?

From the followers of the Pharaoh Akhenaten who first formulated a monotheistic (sun) God, to those of Moses, Jesus and Mohammad have come those who preach damnation and hellfire to those who do not perceive God as they want you to see God. From such hordes came the Crusaders,the destroyers of books of knowledge and institutions of learning in India, Alexandria and Greece, destroyers of churches, mosques, Hindu temples, Buddhist viharas etc.

Jesus's affirmations that He has many other flocks and many mansions in His Father's kingdom do not mean anything to Christian fundamentalists. Likewise, the tolerance preached by Mohammad, at least in some of the Suras of the Koran are ignored by the Jihadis. Both kinds are dishonest but indeed they feel very self-righteous in what they preach.

But, one rarely finds such hypocrisy from the followers of non-Abrahamic faiths. And, yet, they are always excluded from most inter-faith dialogs undertaken by Jews, Christians and Muslims in the US and other western countries. In their eyes, the followers of non-Abrahamic faiths don't count! What a pity? There is a great deal that monotheists can learn from the Hindus, Buddhists, Jains, Taoists etc. If they do, they will find that such immersions in eastern religions will only strengthen their own understanding of their birth-faiths, be they Judaism, Christianity or Islam.
C. Alex Alexander

Dear Dr. Alexander,
Thank you very much for your thoughts. I believe that all the religious, literary, and philosophical traditions in the world belong to the common inheritance of humankind. Bible, Koran, and Vedas are ours. They are there for us to read and learn if and as we want. They are immense reservoirs of wisdom we may tap into when we want to. They contain the accumulated wisdom gained by generations of our wise ancestors. But if we claim that any one of them contains the ultimate truth and fight over it, we would be making ourselves fools. Even if the ultimate truth were hidden in them, we wouldn’t have the ability to comprehend it.
The religious scriptures are collections of classics from the past. They offer us windows through which we see the view of life and the way of life of our ancestors. We should never detach a piece of literature from the original context that produced it, for out of context nothing yields meaning.
In the religious scriptures we see how our ancestors faced the adventure of life, which encourages and guides us today while we face the same adventure of life.
We are not supposed to adopt the ancient laws in the scriptures as our laws today. But they may provide us the guidelines to create our laws for today. For example, the ten commandments given by Moses cannot be used as such today, but we may create similar laws that suit our situation today. The purpose of laws remain the same then and now, only the forms differ.
We find so many unacceptable things in our religious scriptures, but they are the products of our ancestors. They honestly reveal the view and way of the life of our ancestors. There are unacceptable things in the scriptures because there were unacceptable things in the view and way of life of our ancestors.
Imagine how the classics left by us will be viewed by the people on earth a couple of thousand years from now. Will our view of life and way of life as revealed in our literature be acceptable to them?

I am in full agreement with your views in the context of your exposition of the historical evolution of humankind's search for meaning and relevance for our
existence on this planet.

My comments were specifically with regard to honoring anything that reminds us of our past cruelty, ignorance, intolerance etc. For e.g., it would be difficult
for me to consider the Confederate Flag as befitting any honor, or the parts of Manu Smriti which demands inhuman punishment for women who dare to read or hear
the Hindu scriptures, or the ugly parts of Bible, Koran or other scriptures which remind us of the un-enlightened psyches of the religious leaders of
antiquity.

As historical documents which record humanity's evolution into rational and civilized human beings, even the cruel parts of all scriptures deserve
protection and preservation. They should not be destroyed or desecrated, even though not all will agree that such offending parts of scriptures deserve our
"honor" or respect. That was the distinction I was trying to make.

I do appreciate your thoughtful clarification. Best regards,