I have found that there is a huge difference between a good harthal and a goonda harthal. Please read my conclusion toward the end of this post. Please add your comment and share it to your friends. Let us make a difference!

Having returned to India after a long break of about 30 years, I was not sure how a hartal was different from a bandh. I looked for its dictionary meaning, and here is what I found: A closure of shops and offices as a protest or a mark of sorrow. The word has originated from Hindi haṛtāl, haṭtāl, literally 'locking of shops', from Sanskrit haṭṭa 'market' + Hindi tāla 'lock'. 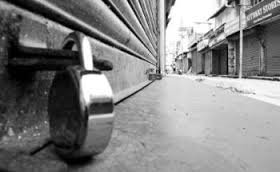 I looked for more information in the Wikipedia, here is what it says: Hartal (pronounced [həɽt̪aːl]) is a term in many South Asian languages for strike action, first used during the Indian Independence Movement. It is mass protest often involving a total shutdown of workplaces, offices, shops, courts of law as a form of civil disobedience. In addition to being a general strike, it involves the voluntary closing of schools and places of business. It is a mode of appealing to the sympathies of a government to change an unpopular or unacceptable decision.[1] A Hartal is often used for political reasons, for example by an opposition political party protesting against a government policy or action. Mahatma Gandhi used the term to refer to his anti-British general strikes, effectively institutionalizing the term. The contemporary origins of such a form of public protest dates back to the British colonial rule in India. Repressive actions infringing on human rights by the colonial British Government and princely states against countrywide peaceful movement for ending British rule in India often triggered such localized public protest, for instance in Benares and Bardoli.[2]

I also found a website that disseminates information regarding the evils of harthal. Here is what this site says about harthal:
Harthal is the hindusthani term (meaning: ‘har’-‘all’; ‘thal’-‘lock’) for general strike or demonstration and denotes mass protest in educational institutions and transport services, usually lasting 12 hrs. It is a mode of voicing dissent against an allegedly faulty policy adopted by the ruling power, and is considered a powerful political tool. However, it is strictly supposed to be voluntary in nature. It is to be noted that the term ‘hartal’ is different from ‘bandh’ in that although the latter also implies a total shutdown of essential services at any given place throughout a specified period, this mode of protest entails mandatory or coercive participation by the public who are required to cooperate by abstaining from travel and work... www.harthal.com/

I found the comments from a lot of people on this site. Here is one from Vanaja Varma:
It is deplorable that harthals have become a synonym for hooliganism in Kerala adding to the common man's miseries. The political parties seem to be disoriented and misled, caught up in the web of their own vested interests and caring two hoots for the welfare of the state or its citizens. Harthals have become a way of life in Kerala what with the so called leaders meaninglessly calling for harthals at their will and wish. Even non-resident Malayalis from other states and countries are wary of the innumerable harthal schedules in Kerala and think twice before planning their trip to their homeland. As it has been proved that harthals fail to serve any purpose, why not resort to an alternative mode of protest? Why not hold a peaceful black flag demonstration or even go for a 24-hr hunger strike? All supporters could join the movement while the non-supporters could resume their normal routine. There is no doubt the peace-loving public would offer their whole-hearted co-operation in such a venture. ---Vanaja Varma ..www.harthal.com/php/showNews.php?linkid=11&newsid=524

Here is a sad and shameful incident reported by Chun Chan, a tourist to Kerala in 2005:
I’m Chun Chan, and i came to Kerala once as a part of a trip to visit the beautiful places in India. When i arrived at Cochin airport, we heard that there was a strike going on in Kerala. I could not visit the beautiful beaches and lakes and all that in Kerala because of the harthal. I also got beaten up by some activists of the strike, saying that I was responsible for the problems facing Kerala. They beat me at the ... it pains even when I type this mail... Stop harthals.. ....www.harthal.com/php/fComments.php?linkid=20

My Conclusion
Based on what I have read and found about harthal, here is my conclusion:
Harthal originated as a peaceful non-violent, passive non-resistance movement in the British India. In order to protest against a policy of the government, or in order to mourn a sad event such as someone’s death, people voluntarily closed their shops. That was an excellent way for people to express their protest or their sorrow. People had the freedom to express their feelings the way they wanted.

Unfortunately this is not the kind of harthal that is practiced in Kerala today. A political party declares hartal, and all people are forced to close their shops, schools, colleges, and all other public institutions except perhaps hospitals. All transportation facilities come to a standstill. No one dares to open their shop fearing attacks from the goondas of the political parties. This kind of harthal has nothing to do with the kind of harthal we originally had. In those days, it was truly a protest of the people, but today they are forced to close their shops by the party goondas. People have no opportunity to express their true feelings. Whichever party declares a harthal, all shops remain closed and all buses stop running, and they claim that their harthal was a success. But was it? It simply shows how successful their goondaism was! This is a new form of slavery! We are slaves in our own land! We are forced to surrender our freedom to the goondaism of the political parties!