Metropolitan Paulos Mar Gregorios disappeared from our sight on Nov 24th 1996, and it has been 16 years since then. He has been enshrined at the Orthodox Theological Seminary in Kottayam. His memory has been celebrated since then every year on this day along with another great father of the church, the founder of the Theological Seminary -- Pulikkottil Joseph Mar Dionysius. I have had the opportunity to attend this year's celebration. 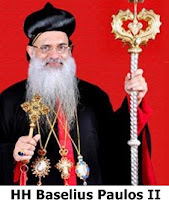 His Holiness Baselius Paulos, the Catholicos of the East, led the celebration accompanied by a host of metropolitans. His Holiness highlighted three shining qualities of Metropolitan Paulos Mar Gregorios which we need to emulate in our own life:

1. As he was growing up, Metropolitan Paulos Mar Gregorios realized that he had been gifted with extraordinary powers of intelligence and memory, and when he realized this, he had several choices with his life before him. He could become anything he wanted. He could become a scientist with global reputation, or he could rise high up in the political field and become a prime minister or a president. However, he chose to surrender himself before the will of God, and serve the church. If he had chosen some other path, still God would have used him for His purpose. But by choosing to serve the church he made the best choice. The choice he made might have been less glamorous, but this choice helped him make a long-lasting and priceless contribution to the wellbeing of humanity.


2. Fr. Paul Varghese (his previous name) was included in a list of priests to be elevated to the position of metropolitans, but later his name was removed from the list.  The details of how this happened are not relevant here. Five years later, he was once again included in the list, and he was elevated to the position of a metropolitan. But when this unfortunate event of the removal of his name from the list happened, he did not fight for his right to be in the list, nor did he argue for justice. He simply surrendered his will to the decision of his church and to the will of God. How many of us can and will do so in a similar situation?

3. When Metropolitan Paulos Mar Gregorios realized that he was elevated by God to great heights, instead of rising up by himself, he chose to raise his church along with him to global reputation. That was a time when the rest of the world did not even know that our church existed here. They didn't know that Christianity existed in India before the arrival of Vasco Da Gama. In 1961, there was a world conference of WCC in New Delhi, and Fr. Paul Vargese was a Bible Study leader of the conference. Fr. Paul Varghese invited the Christian leaders assembled in Delhi to visit our church and see for themselves the church that has been in existence here for two millennia. They came to Kottayam and visited our Catholicos, Geevarghese II. If our church is known in the world today, it has been made possible primarily through the efforts of Metropolitan Paulos Mar Gregorios.

thanks very much for posting this. I never met PMG. Hope to some day. :)