The Story of Pseudo-Dionysius

The Life and Vision of the Fifth Century Church Father who Wrote as Dionysius, the Areopagite 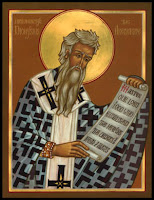 When Paul was in Athens, he had the opportunity to speak in Areopagus, and Dionysius, a member of the court of Areopagus, became a disciple of Paul. Paul began his speech referring to an altar he happened to see in Athens dedicated to the unknown God.


About four centuries later a church father in the eastern Christendom left some writings with the name, Dionysius the Areopagite. Writing in someone else’s name is frowned upon in our times, but in the ancient world writing in the name of someone from the past was an accepted practice. When an author assumes the name of someone from the past, it means that this author continues the same line of thought by being in the same tradition and worldview of the author from the past. If the past author were alive today, this is what he would have said. A good example of this is that some of the letters ascribed to Paul in the Bible were actually written by his disciples in his name after his death. These disciples were not impersonating Paul, but they were actually keeping Paul alive for their generation through those letters. Even the gospels in the names of Matthew and John might have been written in their names by later writers. Even if they might have begun the work by narrating the story, they were completed by others by several revisions and editions. Similarly the first five books of the Bible ascribed to Moses were written by later writers.
This father of the fifth century did not stop with assuming the name of Dionysius. He imagined himself to be Dionysius living in the first century. He wrote his thoughts as letters to other apostles and disciples. He imagines being present at the Dormition of Mary, and he even counsels John at Patmos. Yet all the while he is in the fifth century quoting from Proclus’ works. Proclus was a very influential neo-Platonic philosopher of the fifth century.
This church father of the fifth century wrote as Dionysius of Areopagite for obvious reasons. He found several similarities between himself and Dionysius. Like the original Dionysius, the church father also had behind him the influence of two different cultures—Greek and Christian. Like the original Dionysius, he was also fascinated by the idea of the unknown God. The incomprehensibility of God is the primary theme of the writings of this church father. Writing about the unknown God, he preferred to remain unknown.
This church father might be called the father of the western mystical theology. His works were translated by Scotus Eriugena to Latin in the 9th century. His influence can be seen in the western mystics such as Thomas A Kempis and Eckhart, and in the western thinkers such as Thomas Aquinas and Albertus Magnus. In the Byzantine tradition, his influence can be seen in fathers like Maximus the confessor and Gregory Palamas.
Paulos Mar Gregorios claims that this theme of the unknowability of God was stated much more clearly and forcefully in the writings of Gregory of Nyssa, a fourth century church father.  However, this church father became well-known and influential in the west mainly because of  misunderstanding him to be the original Dionysius, the Areopagite. Later those who cleared this misunderstanding began to call him Pseudo-Dionysius, the Areopagite, meaning that he was not the real and original Dionysius the Areopagite, but a false one. But there was nothing false about him or his thought. He was someone with a very creative mind and originality of thought.
The Vision of Pseudo-Dionysius, the Areopagite

An examination of the view of life of this church father is worth pursuing. He seems to have had a clear ontology and epistemology. He had a clear view of the nature of reality (what exists) and how we know it. These two questions are closely related, for we can’t consider one without the other.
He was fully convinced that the ultimate source of all that exists is fully hidden from our perception and our rational power. He used the metaphor of darkness to relate to it. There is no way around it, and however hard we try, the ultimate source remains incomprehensible. Although we are fully ignorant of the nature of the ultimate source, we know that all that exists (world) derives its existence from the ultimate source. This information reminds us that we are not self-existent beings, but dependent beings. The ultimate source alone is self-dependent, and the entire world is dependent upon the ultimate source.
Although everything receives its existence from the ultimate source, everything is not directly linked to the ultimate source. Some beings receive their existence directly from the ultimate source. Let us call them primary receptors. Some beings receive their existence through the primary receptors. Let us call them secondary receptors. Tertiary receptors receive their existence through the secondary receptors, and so on. Dionysius used the term hierarchy to denote this arrangement. He spoke about the hierarchy of angels and ecclesiastical hierarchy. We understand this better if we relate this to how blood reaches the entire body from the heart. First blood passes through aorta, the biggest artery. From aorta, blood passes through smaller and further smaller arteries, and finally reaches the smallest arteries.
Wherever a being is in the system, it receives existence from a higher being, which is passed over to a lower one. We human beings receive our existence from higher beings, maybe angels, and then we pass it over to lower beings, maybe other animals and plants. A better way of looking at it may be by seeing the whole world as one body. The body is made of organs, organs are made of tissues, tissues are made of cells, and cells are made of molecules. Blood that comes from the heart reaches an organ, then passes to its tissues, then to their cells, and finally to their molecules. The entire world exists with a similar system. Wherever we are in the system, we have the responsibility to receive existence and pass it over to the others. Our role is to become good conductors of the divine life energy.
Although our very existence depends on the ultimate source of existence, it remains hidden from us. How do we think and talk about it? Dionysius suggests kataphasis (affirmative speech) and apophasis (negative speech). He uses the biblical imagery of Jacob’s ladder through which angels climb up and down. Angels climbing up is apophasis—negative speech. Angles climbing down is kataphasis—affirmative speech. Every affirmative statement about the ultimate source has to be balanced by a negative statement. It is like adding a positive number and its negative number results in zero. For example, Christians and Jews all over the world say in their daily prayer, “Holy art thou oh God”. This is an affirmative statement about the ultimate source of existence. But in fact, it doesn’t say anything about the ultimate source. It merely implies that everything that is not the ultimate source is unholy.