The Parents of Christianity 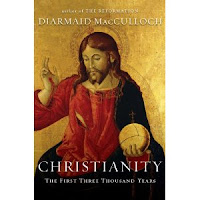 Deviating from the conventional way, MacCulloch begins the history of Christianity not from its founder, but from the history of two different cultures—Hebrew and Hellenic-- as far back from 1000 years before the founder. These two rivers flowing separately for one thousand years, met during the period of the birth of Jesus, and this union gave birth to a third river—Christianity. The two separate civilizations from Europe and Asia met to give birth to an offspring that incorporated the genes of its parent civilizations. Of these two parent civilizations, the Hebrew one may be honored as the mother and the Hellenic one may be honored as the father. When you write the biography of a person, it is usual to begin the biography from highlighting the biography of his/her parents. That is why MacCulloch begins with the life of the Hellenic and Hebrew civilizations before telling us the story of Christianity.
This marriage of two civilizations can be clearly visible from the name of Christianity’s founder—Jesus Christ. Jesus (Joshua) is a Hebrew name, meaning, Yahweh is savior, whereas, Christ (Christos) is a Hellenic name, meaning, a specially appointed representative. The view of life of Christianity spun the strings of the views of both the Greek philosophers and the Hebrew prophets. Christianity incorporated the rituals and celebrations from both cultures. The wisdom of both cultures found their most colorful flowers in the church fathers of the fourth century. The early Christianity imported Platonism, and the medieval western Christianity imported Aristotelianism. A modern Jesus scholar is convinced that Jesus himself was a cynic philosopher in the tradition of Diogenes.
The influence of the Greek culture can be exemplified from the way Jesus was compared to the first and he last letters of the Greek alphabet—Alpha and Omega. When early Christians described their identity they used the Greek word ekklesia, which meant the assembly of the citizens of polis who met to make decisions. While this word was used to denote local church, they used another Greek word, Kuriake, to denote the universal church. Kuriake meant “belonging to the Lord” and it later became kirk and church.
The Hebrew culture was functioning with the traditional three-tiered worldview when the Hellenic world was evolving its earth-centered worldview. Though early Christianity shared the three-tiered worldview, it soon shifted to the earth-centered one. The Synoptic Gospels and the Book of Revelation, and the early epistles of Paul are within the framework of a three-tiered worldview. But the gospel and the epistles of John and the later work in the name of Paul operate within the framework of an earth-centered worldview. The willingness of Christianity to adopt the modern worldview while remaining grounded in faith probably was probably a factor that contributed to its success.
Before meeting with the Greek culture, the Hebrew culture met with several cultures in its thousand years of history. A part of the original Hebrew community was slaves in Egypt, and their life in Egypt and their escape from slavery were very influential in the formation of their culture. The culture of the Canaanites that surrounded them also influenced the formation of the Hebrew culture. Although at the beginning Yahweh, the Hebrew god, was in rivalry with Baal, the Canaanite god, later Yahweh developed further incorporating the characteristics of Baal. Later assaults from foreign powers scattered the Hebrews all over the world. A very large group of the Hebrews was taken to slavery in Persia and about a couple of centuries later, their children returned to Israel. They brought with them the culture of Persia.
The thousand years of history of Hebrews and Greeks is a sample of the history of the various cultures of Humankind. They run down through centuries as a multitude of streams occasionally getting together, then forming new streams, getting thinner or wider, but always influencing one another.
Posted by John Kunnathu