Christianity in Kerala: The Past and the Future 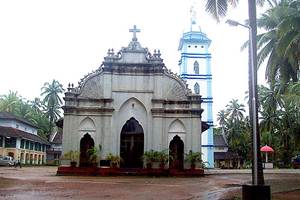 Christianity in Kerala is about 20 centuries old. During the first 16 centuries, this Christian community had a relatively peaceful existence. During the last four centuries it had to pass through very painful experiences. Assaults from outside left it torn into several pieces.  How this community sees itself and how it interprets its painful experiences will determine how it will face its future.


The Past
According to the tradition, Christianity started in Kerala with St. Thomas. Since the fourth century, Syrian Christians began to emigrate here from Persia. Welcomed by the natives, they merged with the way of life in Kerala. They enjoyed their freedom of religion and peaceful life with high social status until the very end of the 16th century. The troubles began with the colonization from the west. The Portuguese colonizers forced their religion upon them with political and military power. Later with the British colonizers came the protestant missionaries with their brand of Christianity. Along with these western colonizers, the Orthodox patriarchate of Antioch also tried to colonize the church in Kerala. Thus due to the assault of these greedy foreign powers, the Christian community in Kerala broke  into a number of pieces.
A Vision for our Future
We existed in Kerala for 16 centuries peacefully, and the troubles occurred only in the last four centuries due to the colonization. Today we are no more a colony of any foreign powers, and it is time to leave the past behind. The past is past. Let us all look forward with hope rather than be captives in the painful memories of the past. This is a time for all the broken pieces of the Christian community in Kerala to accept the challenge of regaining the lost unity. If we can see the vision of a united Christian community in Kerala as it was before the colonizers arrived here, it will surely become a reality.
A Positive Approach

Instead of seeing the four centuries of our plight negatively as a misfortune, we need to start seeing it as a great experience that has made us very mature and strong. Now we are a very strong and informed set of people. Through our colonizers, we got the opportunity to get exposed to the other varieties of Christianity such as Latin and Anglo. We came in contact with the Catholic Church, the various Protestant churches, and also with the other Orthodox churches.  Living in India, we have had first-hand contact with Hinduism, Islam, Buddhism, and other religions. We also have been in direct contact with the Marxist ideology. The wealth of knowledge and experience we have gained from all these contacts along with the strength we have gained over the four centuries of suffering can help us emerge as a leader of World Christianity in this century. Today Christianity is getting weaker in North America as well as in Europe, and the center of Christianity is shifting to Asia and Africa. A mere change in our attitude and approach can make our dream come true.

It is neither possible nor desirable to forget the past. We got split into various groups due to specific incidents in the past. Our differences today were caused by those incidents. We can together examine those incidents impartially and learn important lessons that will help us today in our journey forward. We need not and should not ignore our differences, but in spite of our differences, we must be able to stand together, willing to learn from each other and to work together. Our goal is not a unity without diversity but a unity in spite of diversity. We are no longer a Syrian-only church, nor should we aim to become one. The Latin and Anglo traditions have also become a part of our tradition along with our Syrian and the Indian tradition.

Christ’s Way of Unity
Growing up in my community, I was taught that my particular Christian church is the true inheritor of the original church of Jesus Christ. I learned in the Sunday school classes that my community walked in truth in the last two thousand years of its history while all the other groups deviated from truth. The picture I developed in my mind was somewhat as seen below. 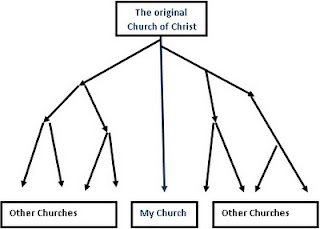 As I grew up I began to realize that there must be something wrong with this picture. When I came in contact with people from other churches, I realized that each group claimed to have the same picture, with their particular church as the true inheritor of the original church. Recently I browsed through the websites of several churches in Kerala, and I found that they all have the same picture of their history. Each group interprets history in such way as to justify itself and prove that all the others have deviated. Thus if you accept the history of any one group as true, you will have to reject the histories of the others as false.
This approach may be described as the approach of self-justification. This is the approach adopted by Adam and Eve in the Garden of Eden. Eating the forbidden fruit, they break an agreement, which is wrong. But instead of admitting their fault, they justify themselves by interpreting the event in their own way. They create their own history to suit their purpose. The result? Relationships are broken and a community is disintegrated.
The approach of Christ is radically different from Adam’s approach of self-justification. According to Christ, God alone is good and righteous. Self-righteousness is replaced by God-righteousness. If we admit that God alone is right and we all can be wrong, what would be the result? We will mend our broken relationships by forgiving and seeking forgiveness, and we will stand together as one body. That is why Paul proclaimed that Christ broke down all the walls of separation, and that in Christ there is no Jew and Gentile, no male and female, and no master and slave.
Unfortunately, Christianity still seems to be in the path of Adam, following the approach of self-righteousness. Each group claims to have the custody of truth, and interprets history in their own way to justify themselves. As a result, we have split into so many pieces, and still keep on splitting. Christianity needs to turn to Christ. It needs to leave the approach of Adam, and accept the approach of Christ.
Christians form about 20% of the population of Kerala. In every village or town you can see the church buildings of various denominations—different types of Orthodox, Catholic, and Protestant churches. Following the path of self-righteousness, they have been breaking relationships and creating a hell even for the remaining 80% of the people. However, if they follow the lead of Christ, and take the path of God-righteousness, they will mend broken relationships and create a heaven in Kerala. God-righteousness is the path of love, but there is no love in self-righteousness. When the Christians in Kerala love each other, others will know that they are Christ’s disciples.

Let us hope and pray that the Christian community in Kerala will rise to the occasion leaving the past behind and take a positive and meaningful step forward.

Email ThisBlogThis!Share to TwitterShare to FacebookShare to Pinterest
Labels: Christianity in Kerala

I find your thoughts very stimulating as always.However I missed the articulation of the purpose for this great unity you are visualizing. I am sure you are not thinking of recapturing past glory or gaining more power as against other religions as these do not reflect the righteousness of God.Then why should we come together unless to strengthen the movement of UNITY of all God's creation? To attain that we may have to make our house in order. Such unity will have to deal with Justice, Peace and Life issues in all areas of life. The barriers of caste, race , economic domination so on and so forth need to be identified and dealt with.
Thank you for your blog. I find whatever I am able to read very useful and helpful to me. Keep it up. Best wishes
+George Ninan

I have just an opposite side of this also.. Why to unite there are common platform like ecumenism for all the factions of churches to come together for any common and social cause .. Indian orthodox church the example I take, It has grown to major extent because the decisions are taken here at Kerala and those were quick .. because of this we have got lot of new institutions in our stride, which is a major stake holder in 99% education in Kerala....

Take examples of smaller countries, which has excelled.. we can't unite the world under one leadership .. because it will not be manageable .. and leadership opportunities will come down .... Hope I could convey the message ..

Bishop George Ninan & Jomon,
Thank you very much for reading this post and sharing your thoughts. I am fully in agreement with both of you. The unity we need to seek is not one without diversity. We need to find ways to live and work together maintaining the present diversity in culture and forms. However, we need a unity in our ultimate goal. Our mission in this world must be the mission of Christ.

Why do we need this unity? This unity is a part of the unity of all that exists, as the bishop rightly points out. United we stand, divided we fall.

Dear John Kunnathu, Thank you for the invitation to read and react. Your angle of vision is secular and aims the prospirity of Christian community. But it is very difficult to happen here. The church's motivation has been changed since 4 centuries. The mentality of christians also changed a lot they forgot the basic teaching of christioanity love,care share etc. let us hope and pray for a wonderful tomorrow the day all christians pray under one roof and praise the name of jesus. thanks. Philip

Enjoyed reading your thoughts on the need to foster unity among all Christian denominations which I am afraid may remain a mere Utopian wish.

Until, Christianity in general finds a way to truly practice the oft-verbalized commandment of Jesus to love thy neighbor as thyself, there is only a snowball's chance in hell for Christianity, Islam or Jewish faith to be the trend-setter in forging unity among all religions.