An Orientation to Our Life 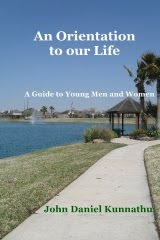 Email ThisBlogThis!Share to TwitterShare to FacebookShare to Pinterest
Labels: orientation to life, questions about life

The synopsis of the book makes me want to read it. I shall get hold of a copy as soon as possible and post my comments after my careful reading of its contents. Regards,

The book is very lucid to read and short in size and therefore it should be an excellent primer for youngsters who are curious to learn about human life, and its purpose, though it is explained within the limitations of an Abrahamic faith-framework. Its emphasis on educating the young folks using simple language and concepts in tackling many issues central to human existence is commendable. From that point of view, the author has succeeded in developing a good teaching tool.

The book should serve as a good primer for youngsters of Abrahamic faiths to understand the value of pluralism. But, I doubt very much whether the "orthodoxies" ingrained in the custodians of the churches, synagogues and mosques will allow a book like this to be used as a primer in educating their youth. Despite that reservation, my sincere congratulations to the author in producing a helpful book that can aid the youngsters of Abrahamic faiths to understand the purpose of human existence. The chapter on questions concerning "sex" skirts the burning issues of our times, especially as they impact on our youth, viz., adultery, divorce, abortions, sexually-transmitted diseases, homosexuality, same-sex cohabitations etc. I am assuming here that these issues were also prevalent in ancient times when the Rabbi was addressing his young audience.

The book's value would also have been enhanced in my view, if the Rabbi had also delved deeper into the wisdom literature of the eastern faiths such as Buddhism, Jainism, Hinduism, Taoism etc to highlight the conceptual congruences between the Abrahamic faiths and other eastern religious tributaries that empty into the same and only "River of God". The latter's characterizations of heaven, hell, sex, purpose of human existence etc., would have been equally challenging for youngsters on this increasingly inter-dependent world to ponder over and see the syncretic features contained in all the great religions of the world. Nevertheless, the openness shown by the Rabbi to the spirit of pluralism as the underpinning needed for the preservation of a purposeful human community is indeed laudable.